A few posts on creativity and innovation you may have missed. On Umbrellas and lost memories 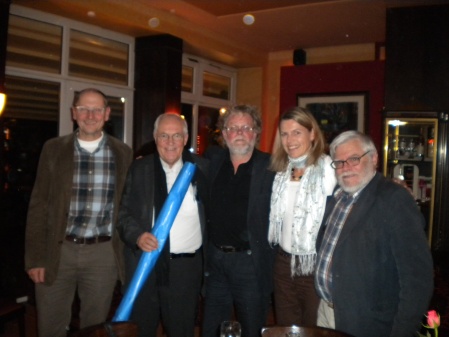 John Bessant, a major figure in research into Innovation, has turned his attention to creativity in his latest book. His recent blog triggered memories of a special dinner in Darmstad some years ago.

In his recent blog, John illustrates how one creative idea came to fruition:

Vienna. 1926 and Slawa Duldig was looking forward to a pleasant Sunday walk in the gardens of the Kunst Historisches Museum, a favourite haunt. Except that the prospect on this May morning with its ominous looking clouds was not so inviting – and so to prepare for the likely showers she took a heavy umbrella with her. She captured her frustration in her notebook  – ‘Why on earth must I carry this utterly clumsy thing? They should invent a small foldable umbrella that could be easily put in a handbag’. A great idea – but ‘they’ hadn’t yet done it and so Slawa decided to remedy the situation.

She was a sculptress, a successful artist used to working with ideas and giving them form.  She played around with the notion, sketched some designs and realised that to fit in her bag the umbrella would not only have to be small, it would need a folding mechanism.  Where else had she seen something like that?  A flash of insight and she was off peering excitedly into shop windows and talking to the owners of businesses specialising in window blinds.  And she’d need some kind of frame, lightweight, to give shape – so another shopping expedition to stores specialising in lampshades.

Gradually, just like one of her sculptures, the prototypes took physical form and her experiments continued. Having tested them out she finally decided to patent her idea – by now called the ‘Flirt’ – and lodged it in the Austrian Patent Office on September 19th, 1929.  The world’s first folding umbrella was born and these days around 500 million of its descendants are sold each year.

Umbrellas conjure up creative thoughts and memories. From a personal perspective, I recall an evening in Darmstad to celebrate the retirement of creativity guru Horst Geschka when Horst was presented with a special umbrella. I suspect the idea came from Jan Buis, pioneer of design studies at Delft, a dear and much lamented friend. The dinner  morphed into creative chaos around the theme of umbrellas. Unsurprisingly, much is now a blur in my memory. Anyone there with a better recall please contact me.

Grateful thanks to Frido Smulders, (see image above of this fine gentleman, scholar, and another good friend) who helped me correct various errors in my original draft of this blog. Frido also provide information about the Festschrift book edited by Martina for her father’s celebrations. (Immer eine Idee Voraus, Harland Media, Lichtenberg, 2010).