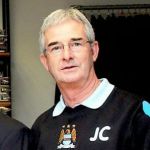 A few hours before the flu news news broke, I had interviewed Jim at his Platt Lane office in advance of a presentation he was planning for The Manchester International Festival. He was preparing for his talk on identifying and fostering talent, subjects in which he is highly qualified.

Micah was one of the talented young players who had been at the Academy, and Cassell talked proudly of him, and other emerging stars such as Stephen Ireland, and of his team which won the youth-cup in 2008, beating Chelsea’s top-dollar stars in the final legs of the competition.

Plenty of Premier League academies are more salubrious, many have annual budgets in excess of Platt Lane’s £2m, several boast better facilities, more recruits, bigger staffs. But none can compete with the output of this place.

“We’ve never won a national trophy and yet we have produced more first-team players than any other academy,” says Cassell. “We sacrifice our teams sometimes because the priority is the development of individuals. If after 10 years we had four FA Youth Cups but no players, we wouldn’t have done very well, but we’ve brought through 25 to the first team, 24 of whom are still playing with us or in league football. Six are internationals. We’ve recouped £31m in transfers and, if you add Micah Richards, Michael Johnson, Nedum Onuoha, Kasper Schmeichel and Stephen Ireland, provided another £40m-worth of players for the current City squad.”

Manchester City supporters have been fulsome in their praise of the contribution made by Cassell, who is quick to share credit with his small team of senior coaches.

A former book-keeper and local government officer, Cassell’s playing career lasted only two games [at Bury, a nearby regional club] in the mid-1960s.

One report explains why:

After doing some scouting work [for Oldham, another local club] he was appointed chief scout at City under Joe Royle [English International and then Manager of Manchester City].

When Royle brought him to City in 1997 Cassell set about re-organising the youth set-up. In Blue Moon: Down among the dead men at City, author Mark Hodkinson describes him as ‘thoughtful and shrewd, candid and friendly, immaculate in a suit and tie and wire-framed glasses, the original Gentleman Jim’. The following summer he presented a 51-page dossier to new chairman David Bernstein and the board. According to Hodkinson, it revealed ‘a club run by people without real job specifications, where the hierarchical structure was muddled and essential facilities had to be borrowed, or were missing altogether’. Bernstein spent £500,000 to implement the reforms, which might be the shrewdest investment the club has ever made. Cassell’s first coup was picking up a 15-year-old Shaun Wright Phillips, who had been released by Forest, and he is responsible for signing Micah Richards from Oldham’s youth academy aged 14.

Cassell leaves a consistent impression on friends, colleagues, and journalists who have turned up at Platt Lane to report on the Academy and its founder. It is reflected in the interviews quoted here, and in my own meetings with him. You could say that he has a consistent leadership signature, authentic and hard to simulate.

Signature leadership is becoming part of the leadership development vocabulary. In absence of a more thorough survey, I would attribute its growing popularity to derive from the work of the Sloane School (MIT) and its Four Capabilities Framework.

This framework is also a good starting point to the related ideas of distributed leadership. It claims that it can:

… help leaders discover their unique Change Signature – the leader’s credo and characteristic way of creating change. Each leader’s signature draws upon his or her values, skills, experience, tactics, and personality in order to build trust, respect, and authenticity.

I was also reminded of a famous quote about fifth-level leaders, who are becoming recognized as more successful in building effective organizations than the turbo-boost results and ego-driven efforts of many charismatic leaders. Probably it’s a coincidence that Leaders we deserve identified Manchester City’s manager Mark Hughes as a fifth-level leader before he joined the club. His style has seen him survive serious corporate turbulence which would have hastened the departure of a manager with a more volatile style and a more abrasive relationship with the owner and board.

The debate over charismatic and fifth level leaders will continue, as there is a need for more and more careful studies of context, leadership styles, and effectiveness.

Thanks to Olivia Day, World Academy of Sport for arranging the interview with Jim Cassell. To The Manchester International Festival and The Executive Centre at Manchester Business School for the opportunity to discuss identification of talent with Jim and other distinguished panellists from industry, academia and government.