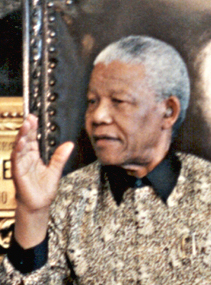 A nine foot statue of Nelson Mandela now stands in London’s Parliament Square. The homage paid to a great leader is the outcome of over a decade of controversy

On August 29th 2007, the great man watched as the wraps came off his statue in Parliament Square. Fleetingly I thought of other statues of leaders. How size certainly does matter. How art and politics can not be kept apart, any more than sport and politics could be kept apart in an earlier South Africa. How the downing of statues can be as symbolic an act as their erections.

He already is an awesome world-figure, destined for his place in the history of the 20th Century. There may well be revisions to the story. There always are. Human-scaled blemishes will be revealed to enrich the tale of his role in the struggle of his country on what he termed a long walk to freedom. Enriched by evidence of weakness, temptations yielded to … Otherwise, the deification process will have succeeded in eliminating the personality behind the icon.

I was immensely moved by Mandela’s story written down in his autobiography. I go back to it from time to time. I remain in awe of what he communicated about his time in prison.

‘Even in the grimmest times … I would see a glimmer of humanity in one of the guards, perhaps just for a second, but that was enough to reassure me and keep me going. Man’s goodness is a flame that can be hidden but never extinguished’.

With Mandela, the process is reversed. In his every public action his ‘goodness’ shines through. We search for that second of wilfulness and vengefulness that seems forever hidden. For from diminishing his achievements, I feel this will enrich them by connecting them more strongly to the wider human world of weakness and frailty to self-service.

The idea of the great charismatic leader is coming increasingly under scrutiny. Leadership scholars have largely discarded earlier ideas of the heroic leader, or at very least challenged them. In the 1980s, a tamed-down version of charisma was proposed, as the transformational leader. More recently, the expression post-charismatic leader has emerged, from theological and secular sources.

In this context, Nelson Mandela and his story deserves the closest attention. He may be the exceptional case which tests a wider concept. Classical leadership theory would suggest that the course of history was fundamentally influenced by the actions of the great leader.

An excellent recent biography by Professor Lodge adds to several authorized biographies, as well as Mandela’s own accounts. It suggests that Nelson Mandela was

Especially sensitive to the imperatives for acting out a messianic leadership role during his [time as a guerrilla commander] …deliberately constructing a mythological legitimacy.. to engender hopes that salvation would be achieved through heroic self-sacrifice

Did the charismatic leader make a difference? The more you dig, the more complexities emerge. Whether you read to challenge the idea of the great leader, or to challenge it, read for yourself.

Look on my works, ye mighty and despair

Today’s story of the tribute in Parliament Square is more of an ironic tale. One version might run as follows.

The idea of erecting a statue to Nelson Mandela has been around for over a decade. There was (and still is) a highly suitable place in Trafalgar Square, which has four plinths for monumental pieces. Three are occupied with military and monarchic figures. The fourth would be particularly appropriate as it is close to the South Africa House, focus of so many ‘Free Nelson Mandela’ demos during his imprisonment on Robben Island.

When the public was invited to suggest appropriate images, For some while, a favored image was of a piece which would celebrate animals in wartime service. Nelson Mandela was among other front runners together with The Queen, Margaret Thatcher, Lady Diana, as well as long shots such as David Beckham, Winnie the Pooh, and a very large Pidgeon, (capturing one of the more intrusive visiting groups that flock to Trafalgar Square).

The fund-raising ran ahead of the official decision, and the statute commissioned was considered too massive for the original location. Eventually the political pieces fell into place, and Nelson Mandela’s image was unveiled at Parliament Square, rather than close by to that other Nelson atop his column in Trafalgar Square.

What the poet says

Trust the poets to have something interesting to say. Anyone with a taste for such things will find something in Shelley’s words I borrowed above.