Book Titles: The long and the short of it 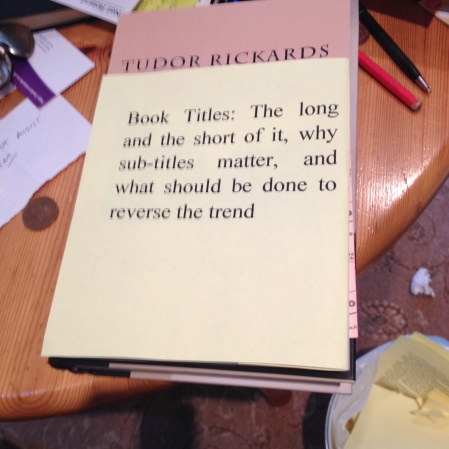 Ever wondered why some book titles are very short, and others are very long? Here’s an explanation.

Every month I scan a long list of book titles that I have compiled for further study. Recently, I noticed the remarkable variety in the lengths of titles. In general, books purporting to be for minority audiences tend to be very long, books for popular consumption were on the short side.

For an example of the longer variety, here’s a twenty-six-word mega-title.

Dream Hoarders: How the American Upper Middle Class Is Leaving Everyone Else in the Dust, Why That Is a Problem, and What to Do About It, Richard Reeves, Brookings Institution Press, 2017.

In earlier times, the lengthy book title was commonplace for tales where the author felt compelled to spell out their redemptive message or cautionary tale in some detail. This practice was well and truly inverted by Jane Austin’s one-word titles Persuasion, and Emma. These made her three-word titles Sense and Sensibility, and Pride and Prejudice appear, well, wordy.

The longest book title in English

The Guinness Book of Records (where else) accepts the claim of a Dr S. Subramonian for producing the longest title in English.

The book, is about Daniel Radcliffe, best known for his starring role in the Harry Potter movies.

According to Atkins Bookshelf

The longest title begins with

“Daniel Radcliffe the story of the not so ordinary boy chosen from thousands of hopefuls” and after about 1,000 words ends with “whom let many more laurels be blessed with to his ever royal crown of fame.”

Atkins Bookshelf provides the entire title, on the link I have provided.

The book itself is a mere 123 pages long. Like other Guinness Book of Records entries, this one is a blatant bid for a claim for fame.

Not so with the book of the play:

The persecution and assassination of Jean Paul Marat as performed by the inmates of the Asylum of Chareton under the direction of the Marquis de Sade.

In word length, this just just creeps ahead of Dream Hoarders etc etc.  Its title was insufficient to deter playgoers and literary commentators.

Why such long titles?

Presumably the trend to long titles has something to do with selection algorithms, that recent electronic illustration of Darwinian theory.  Such a title permits large number of keywords which increase the chances of a book reaching the attention of its niche audience.

Shortly after this week’s post was published, The Economist accepted a briefer version, shown below. 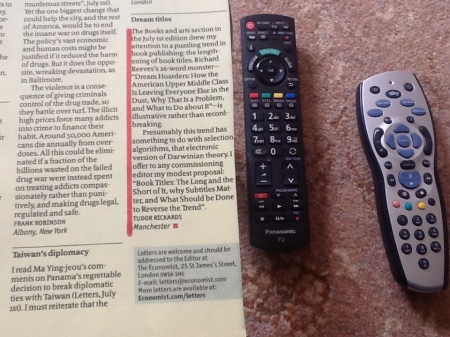 This entry was posted on Monday, July 17th, 2017 at 4:24 pm and is filed under Uncategorized. You can follow any responses to this entry through the RSS 2.0 feed. You can leave a response, or trackback from your own site.

One Response to Book Titles: The long and the short of it