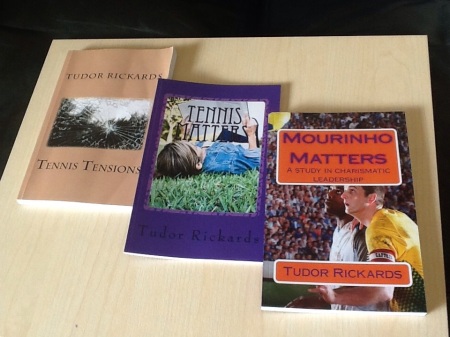 The pun in the title of my book, Tennis Tensions, has done me no favours. It has attracted attention mainly from people interested in the important but unintended issue of the tension in tennis racquets not in tennis players

Now the mighty Amazon organization has helped me clear up the confusions. Click here for more information.

Starting today, [12 January, 2017] a clarification is offered for purchasers of the e-book version. There seems to have been interest from business and sports professionals and teachers.

To encourage would-be customers, the message comes with special offers over the next week, after which the price returns to at least the price of a cookie and latte at your favourite computer cafe.

To explain in my own words:

Tennis Tensions is a case study of forty critical matches played in the course of the US Open in September 2015. It examines the tensions revealed, in order to understand the factors influencing a drop off in performance.

This is the tournament in which Serena William is competing to achieve what became known as The Serena Slam, winning all four Gram Slams in a Calendar year. The pressures to succeed are even more intense than usual.

In the Men’s tournaments, other stories develop. The top seed and favourite for the Singles title is Novak Djokovic. He becomes the prime target for a crop of emerging young talents seeking to beat the top gun. The great Bryan Brothers are suffering a dip in form, and are in danger of failing to win any of the doubles trophies in the four Grand Slam events of the year.

How do players cope with the tensions of the moment and deal with performance anxiety?

Ah, yes. Donald Trump. In a light-hearted passage, I speculate on the motives of a political hopeful who had unexpectedly turned up at the tournament. What happened next? You’ll have to read the book.

There you have it. If you are interested in tensions influencing the outcome of sporting contests, act now to save yourself the cost of a coffee. Oh, and tell your friends.

This entry was posted on Thursday, January 12th, 2017 at 2:09 pm and is filed under Uncategorized. You can follow any responses to this entry through the RSS 2.0 feed. You can leave a response, or trackback from your own site.