The Deal, by Jon Smith, super-agent 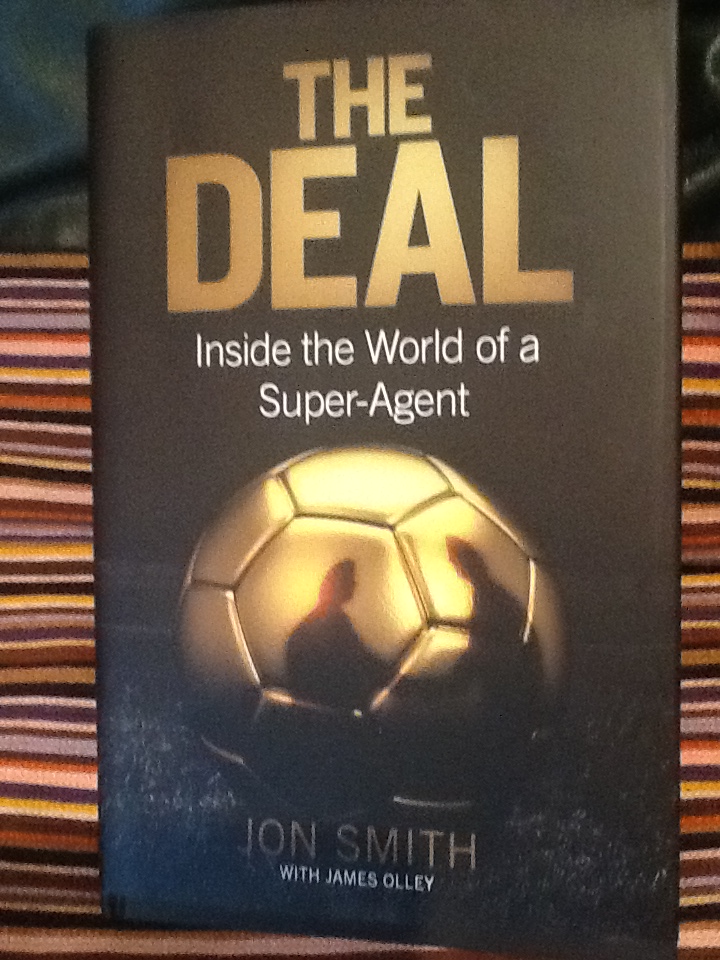 The Deal is an autobiographic account by Jon Smith of the life of a football super-agent.  Smith in his time represented Diego Maradona, the England football squad, promoted Mikael Gorbachev on a speaking tour of England, and pioneered various financial schemes not always approved of by the Inland Revenue

Mr Smith is aided by sporting journalist James Olley, who is thanked gracefully ‘for not only capturing my voice, but also transposing my heartbeat’. This suggested to me the super-agent, maybe aboard a private plane, or waiting for a transfer-day deal, dictating his recollections and providing the recordings for Mr Olley to convert into text.

As Jon Smith concedes, super-agents in football are not particularly well-regarded by other members of what Sepp Blatter used to call the football family. They spend much of time concealing what they really want as part of their professional practice.  This perspective may have influenced my own reading of the book, if my own professional practice had not already disposed me towards looking at books as texts to be examined for the authors’ intentions. The Deal offers a rich set of clues in this respect.

What it says on the cover

The back cover blurbs include one which reads suspiciously as if the busy and well-known football personality it is attributed to had said, “tell you what Jon, I’m up to me wotsits with grief at the moment. You send me the sort of stuff you want me to put down, and I’ll tweak if, OK? Cheers mate.”  But the quote seems more like the handiwork of one of those literary young guns who write press releases for a living. [Note to lawyers: This is a flight of fancy, and in no way is intended to suggest the back cover  blurbs are anything but accurate representations of text supplied by admiring readers about the book.]

Biography as a thriller

The book starts not unlike the style recommended to writers of popular fiction.  Grab the reader’s attention with the first sentence, keep the drama level high, fit the murder in as soon as possible.

‘Sleeping is difficult in the safe house‘. Yes, that works nicely. The author is in fear of his life in Odessa. A ‘monstrously imposing man’ bursts into the room accusing him of murder. Yes, still on message. The prologue ticks the click bait requirements of the holiday thriller.

Subsequent chapters are more subdued in tone. Jon Smith appears as a person offering a series of personal anecdotes which offer a plausible account of the deal culture in football and its complex, sometimes shady nature.

I have a fondness for stories of adventure, and adversity overcome. The really good ones transcend fact and fiction, and help the reader escape from or postpone any critical faculty. The not quite-so-good ones still engage me, but at a level of an autobiography (I am who I am; I am widely misunderstood). The Deal, for me, falls into the second category. It allows the reader to assess how accurate the story is, without necessarily accepting it uncritically.

We were spared the revelations

I found the entrepreneurial and creative requirements of deal-making particularly interesting. We were spared the juicy killer-revelation about some celebrity’s sex life, which is too-frequently built in as to plug a book in the author’s round of Radio and TV interviews. I have no doubt Jon Smith could have found at least one such bit of grime from his experiences.

I could have done with more about the business of football deal-making and less about the private semi-confessional sections about the author.  My  recommendation is not quite as fulsome as the ones on the back cover. For all the professional editing support, Jon Smith might have been better advised to slim it done quite substantially.

However, I finished the book, even scanning the index, to see if I might have missed some of the mentions of the footballing greats it mentions.

One for the football fans and wannabe super-agents?

This entry was posted on Tuesday, September 20th, 2016 at 10:12 am and is filed under Uncategorized. You can follow any responses to this entry through the RSS 2.0 feed. You can leave a response, or trackback from your own site.