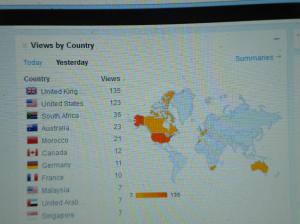 Recently, Word Press has been inviting editors of blogging sites to view country by country visits to their sites. This reveals an array of national flags plus a map of the world with colour densities of visit frequencies. The information suggests possibilities for a new form of electronic stamp collecting

As each day progresses, there is a deepening of colours on the Word Press map growing from West to East, as new countries and visits are displayed. In the case of Leaders we Deserve, early morning (Greenwich Mean Time) visits are shown as arriving from The United States and Canada to the west, and Australia and New Zealand to the East. By midday, the European countries begin to appear, and the UK overtakes the USA in numbers of site visits.

The stats do not provide full information. Only 10-12 countries with most site visits are reported. This means that as the day progresses, newer locations become masked by the stats of earlier ones.

As a consequence of the cumulative reporting of locations, ‘Middle Earth countries’, (Europe, Africa, Western Asia) appear later, and some will be hidden from view.

The image above from May 6th 2012 gave the following pattern of most frequent visits:

I also noted less frequent visits from Indonesia, Myanmar, Saudi Arabia, Morocco, Bangladesh and Egypt, after checking the situation earlier in the day.

At first I was interested in the statistics for Leaders We Deserve. But the flags reminded me of those stamp albums of childhood, with one country per page. I think of it as a form of electronic stamp-collecting and maybe it will become a harmless occupation (like train spotting in Second Life?) for the age of the Google map.

In researching this idea I discovered that electronic stamp-collecting already has its advocates, although traditional methods of stamp collecting are surviving the decline of usage of postage stamps worldwide.

This entry was posted on Tuesday, May 8th, 2012 at 3:52 am and is filed under Uncategorized. You can follow any responses to this entry through the RSS 2.0 feed. You can leave a response, or trackback from your own site.