The rise and fall of Bo Jilai and Gu Kailai 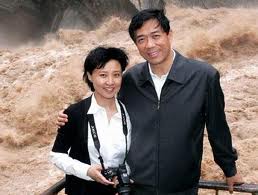 The rise and fall of the charismatic political leader Bo Jilai provides an insight into political leadership processes in contemporary China. The story took on an additional twist with the prosecution of his wife and one-time celebrity lawyer Gu Kailai, for the alleged murder of British businessman Neil Heyward, a friend of Bo.

Jonathan Fenby of the Guardian provides background to the story. [April 10th 2012]

Though he had cut a swath for the past five years with his promotion of his mega-city of Chongqing, complete with the singing of old patriotic songs, Bo was (a) too flamboyant and uncontrolled a figure to be tolerated by the consensus board that runs China, and (b) lacked solid factional support. He was too much of an individualist in a system that works by committee. Whatever fame it brought him, his ambition made him vulnerable in the end. [But] Bo fell because he was too much of a tall poppy and lacked allies – his handling of the fall-out from Heywood’s death in a Chongqing hotel room was also exceedingly clumsy.

The downfall of Bo was spectacular enough, but then the story took on a more sinister tone with the arrest of his wife Gu Kailai for the death of Neil Hayward

Gu, Bo’s second wife, seems to have much in common with her husband. Like him she is known as charismatic, eloquent and bold. She forged a high-profile career as a lawyer, which she bolstered with two books on her successes representing a well-known sports coach and Chinese firms challenging a US court judgment.
Like [her husband] she comes from party aristocracy: although her mother was descended from a famous Song dynasty minister, her father, Gu Jingsheng, was a renowned Communist general. But as her husband climbed the political ladder, Gu’s public profile declined dramatically. Bo told reporters last month [March 2012] that she gave up her career two decades ago so she could not be accused of benefiting from his position.

She is thought to have spent much of her time in the UK, where their son studied at Papplewick, a prep school in Ascot; Harrow and then Oxford University from 2000. It is understood Gu had suffered from depression in recent years, and it is thought she may also have sought treatment in Britain.

Heywood, who told friends he got to know the family after writing to several leaders in Dalian to introduce himself, said he had helped arrange [their son] Bo Guagua’s education. According to the Wall Street Journal, he was among a small group of friends and advisers on whom Gu relied in recent years.

In a subsequent editorial, The Guardian described the developing story as evidence of irrevocable changes in China through its economic transition and the inevitable transparency of an era of Social Media.

What was it over? The investigation into the murder Neil Heywood, in which Bo’s wife Gu Kailai was strongly implicated? The rise of an opportunist princeling, who had turned a city with the population the size of Canada’s into a massive personal springboard to national fame? It took more than a month from the incident which started all this, the dramatic flight of Bo’s former ally and police chief Wang Lijun to the nearest US consulate, to the removal of Bo as Chongqing chief. Another few weeks elapsed until Bo was dismissed from the politburo. Obviously Wang’s allegations against his former boss had to be investigated. But there must also have been one big bust-up, as rival party barons settled scores over the seat in the standing committee that Bo will now never occupy.

The fall of Bo tells us about the ability of the communist leadership to manage change. The Brutal factional politics can no longer be concealed behind a screen. It is duplicated in real-time all over millions of them. The second is that, whether or not Bo’s fall was accidental or triggered by forces outside Chongqing, the myth that the grey, collective, consensus-led leadership can carry on business as usual has been temporarily dented, if not permanently shattered. The next generation of leaders faces such massive that it patently cannot carry on business as usual. Third, Bo’s rise and fall came amid a steady crescendo of debate about the need for reform, political as well as economic.

I have drawn mostly on the excellent Guardian coverage of the breaking story. More information and video links can be found through the [US] lonedaysite. However, I am conscious of the perils of reporting only through the Western media sources. Through western eyes, accounts have the density of a John le Carré political novel and with a dash of Lewis Carroll.

The image of Bo and Gu is from www.wantchinatimes.com where it is attributed to an internet photograph.

This entry was posted on Thursday, April 12th, 2012 at 4:15 am and is filed under Uncategorized. You can follow any responses to this entry through the RSS 2.0 feed. You can leave a response, or trackback from your own site.