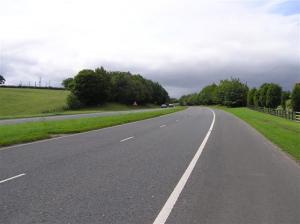 Research by Irish scholars has revealed the truth about President Obama’s birthplace. It was the little Irish hamlet of Ballymeenag.

Conspiracy theories about President Obama’s place of birth have been found partly confirmed. The President was conceived in the rural hamlet of Ballymeenagh in the Republic of Ireland, but was born after his family moved to Hawaii, and where his father changed his name from O’bama to Obama. The tiny hamlet, now uninhabited, should not be confused with the beautiful township of Ballymenagh, County Tyrone shown clearly in the image.

The vital evidence comes from a document found tucked away in the Book of Kells, presumably used as a bookmark by a student from Trinity college, Dublin. The priceless evidence recorded the time the O’bamas spent in Ballymeenagh in rural povery.

The President is travelling to Ireland today in attempt to throw people of the scent by claiming lineage from the nearby township of Moneygall. He is accompanied by 500 personnel including decoy helicopters. Some of the 300 inhabitants have been practicing their welcome song

“O’Leary, O’Reilly, O’Hare and O’Hara,
there’s no one as Irish as Barack Obama.

From the old Blarney stone to the green hills of Tara
there’s no one as Irish as Barack Obama.”

Not all the information in this piece has been authenticated with the rigour to be expected from a Leaders we deserve post.