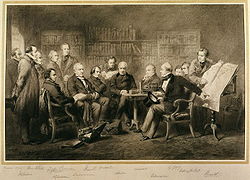 David Cameron and Nick Clegg reduced the complexities of a General Election campaign to a beauty contest between two charismatic leaders. Did they neutralize one another’s impact on the electorate? Does the country now have the coalition it deserves?

Nearly a week after voting ended in deadlock, Prime Minister Brown announced his resignation [10th May 2010]. David Cameron was able to establish a coalition, the first in seven decades, between his conservative party and Nick Clegg’s Liberal Democrats. BBC’s Nick Robinson called it the election which nobody won.

Twenty hours ago David Cameron returned home wondering perhaps whether his dream was over, whether, at the last, Gordon Brown would outmanoeuvre him again. Yet it is he who has now brought into being the partnership between two political parties which New Labour talked about but never delivered, he who has agreed to fixed-term parliaments and a referendum on voting reform, he who has made a man whose policies he attacked again and again in the prime ministerial debates his deputy prime minister and put four of his allies in the cabinet. It is an arrangement which will either collapse under the pressure of competing tensions between and within the two parties or it will shape politics for a generation to come. David Cameron took office on a cold dark night issuing a warning about hard and difficult decisions to come. He did so in a manner, however, that suggested he is determined to shape events and not to be shaped by them.

The pivotal episode of the campaign is widely reported as being the three televised debates between the party leaders. It is also now widely held that Gordon Brown performed as was expected, capable in content but dire in delivery. Cameron was not as clear a winner as was anticipated. In the first debate Nick Clegg grabbed the headlines for outshining Cameron and Brown. Cameron, better prepared, also performed better (or at least not so badly) in the subsequent debates. Polls suggested a big swing to the Liberal Democrats.

The simple narrative goes like this. A new charismatic leader appeared and overcame the older charismatic leader. Weber described it as qualities which result in an individual as being considered ‘of divine origin or as exemplary, and on the basis of them, the individual concerned is treated as a “leader”.’ (quote from Bryman’s Charisma and Leadership).

The simple narrative would then result in the leader being swept to power. He wasn’t. The lead in the poll faded. It might be concluded that a simple charisma-based explanation does not work.

The outcome was what Nick Robinson called the election which nobody won. So the next act of a drama unfolded. Here it became clear that the calculations were not particularly difficult, but getting a satisfactory resolution was. In the old political numbers game, the Conservatives fell short of the votes needed to run a government without relying on support of the other parties. This could be achieved if a coalition with the Liberal Democrats came about. The departing Government had done so badly, that even in coalition with the Liberal Democrats, support from other parties would be needed.

The situation called for some form of resolution through political means (for all its weaknesses, the political system is robust enough to exclude a non-democratic seizing of power by military or monarchist forces). The process involves negotiations, horse-trading, and various bits of political skulduggery, all conducted ‘in the greater interests of the people’. Charismatic leaders leave much of this to trusted lieutenants to reduce the problems of being seen as human beings who might otherwise be accused of duplicity, deviousness, or worse.

What would you have done?

A nice leadership development suggestion. It’s worth playing out as a ‘hypotheticals’ exercise. One team plays Gordon Brown and advisors; another David Cameron et al; a third Nick Clegg and cohorts. Other teams or individuals representing the Media. Make it as realistic as you like. Decide who should approach whom, and in what sequence.

From the evidence of the manifestos and the debates, the Liberal Democrats are closer to Labour in the immediate treatment of the economic crisis; The parties are broadly supported by a ‘progressive’ grouping of the electorate which is essentially anti-Conservative. On the other hand, the ‘numbers’ game suggest that Cameron needs Clegg to form a Government, so a Conservative/Liberal Democratic arrangement is more likely, if each side can find acceptable concessions.

We know now that in the world we live in, Clegg announced he would speak first with Cameron. Brown offered Clegg a cherished goal on electoral reform, and even offered his own future resignation to help the process. Delegates shuffled backwards and forwards with concessions. We also know that Clegg had secret talks with Brown. We also know that the outcome was formation of a coalition between Conservatives and Liberal Democrats. Might there be other possibilities revealed in the hypotheticals game?

Have we seen in this case example the limits of charisma? The eventual numbers of Liberal Democrat MPs were fewer than those in the last Government. Would they have fared any worse if Mr Clegg had not been appointed, and the respected but less-obviously charismatic figure of Vince Cable had found himself in charge of the party during the electoral debates? [I recognise this is still in ‘hypotheticals’ mode, and perhaps of primary value only as an exercise in testing assumptions].

In any event, the outcome encourages us to look into concepts such as distributed leadership, and maybe back to the old sociological war-horse Weber and his notions of charisma emerging in modern institutions ‘in times of great public excitement’.

Image, via wikipedia, is of The Coalition Ministry of 1854 as painted by Sir John Gilbert (1855). The Coalition of ‘Whigs and Peelites’ collapsed ahead of an equiry into incompetence in the conduct of the Crimea war.

This entry was posted on Wednesday, May 12th, 2010 at 9:14 am and is filed under Uncategorized. You can follow any responses to this entry through the RSS 2.0 feed. You can leave a response, or trackback from your own site.

4 Responses to Coalitions and Charismatic Leaders