Barack Obama’s inauguration: meaning more that he says, saying more than he means 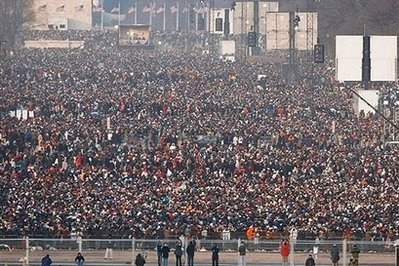 Well over a million people, almost universally supportive of Obama, had crammed into the Mall for his inauguration on the steps of the Capitol this week [Tuesday Feb 20th, 2009]. His arrival was greeted with such acclaim by the crowds that someone watching with me muttered about historic precedents (at least that’s what I thought he said). Part of my mind flashed back to the adoring crowds of similar scale erupting with joy at the public appearances of the Ayatollah Khomeini.

What would Obama’s dazzling rhetoric do today? What would the world think? Would this democratically appointed president demonstrate such charismatic power over his people, that the watching world would be reminded of the power of other, less democratically-elected charismatic leaders?

I need not have worried on that account. The speech was more than adequate for the crowd to celebrate their witness to an historic moment. But there were no transcendent flights of rhetoric. The words had been carefully chosen, and were not chosen to sweep up a crowd to the emotional heights. The inaugural speech of an incoming President is going to become part of history. The new leader is aware of the multiple audiences in time and space. So he (always he for the time being, although Hillary may have cracked that particular glass ceiling a bit further) treads carefully, picking his words and tone with those audiences in mind.

Did Obama flunk an historic opportunity?

Some reporters later damned the speech with faint praise. And it is also true that he fluffed his few lines in the swearing-in ceremony, and was clearly ill at ease. So much so, that a rather clandestine repeat was quickly held with a minimum of witnesses later, to head off future stories of a lack of legality in his appointment.

But did that did trigger an unintentionally low-key performance? For me, the tone fitted the intended message. The words effectively said. We are in deep trouble, deeper than we may like to accept economically, environmentally, and as part of a squabbling community of nations. The tone was about right.

The challenge he confronted was to perform a metaphorical juggling act on a high-wire. Would he avoid saying some things that had to be said, or say things that were better left unsaid? How to call for collaboration and reassure all parties of his good intent. How to reassure, while maintaining his can-do message of rapid change, now increasingly delivered with the implications of personal hardships to come. How to seek unity and be gracious to the outgoing administration and its leader George Bush, while making it clear that it had contributed to problems that now had to be tackled big time.

The touchstone is the alignment of the words and mood with actions. He may have a great wealth of goodwill, but he also has to demonstrate quickly that “yes he can”. Within 24 hours several symbolic actions suggested to me he was a step ahead of the commentators. He signed an order effectively leading to the closure of Guantanamo Bay prison camp.

He also announced an effective pay freeze for White House officials. A waste of time, one former Bush aide called it. But he missed the point.

Another statement of intent was to deal with the culture of lobbying at the heart of Washington’s political life. That would be a great political change. I don’t know what it will take, but he’s passed the first credibility test in committing himself by speaking about matters which a more cautious leader might have left unspoken.

For students of leadership (the academic bit)

Barack Obama’s inaugural speech will be analysed as much as any text in contemporary history. We must we forget that it was a speech and a speech act through which we mean more than we say, and say more than we mean. Study it for examples of dilemmas of leadership.

Since the evolution of post-modern man we have acquired skills at taking a speech and deconstructing it to arrive at meanings that are not grounded on authority, not even on the authority of the author of the speech. If, like Chip Morningstar you are not totally convinced by postmodernism you may want to take a different approach.

This not just a speech, but a speech act. A friend who is a gifted figure in the world of linguistics has tried from time to time to help me understand speech acts. I may not have got it right, so anyone trying to extract some of this post for an essay, be warned.

For what it’s worth, my understanding is that a speech conveys social actions, and so can be studied as a social act. Now that sounds pretty modern, but you can go back to the time when America’s first President was polishing his famous speeches for that idea. The English philosopher Thomas Reid wrote in his Active Powers of the Human Mind (1788, chapter VI, Of the Nature of a Contract).

“ Between the operations of the mind, which, for want of a more proper name, I have called solitary, and those I have called social, there is this very remarkable distinction, that, in the solitary, the expression of them by words, or any other sensible sign, is accidental. They may exist, and be complete, without being expressed, without being known to any other person. But, in the social operations, the expression is essential. They cannot exist without being expressed by words or signs, and known to the other party.”

Which still serves as starting point to studying a social act today.